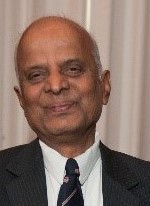 Dr. Vaikuntam. I. Lakshmanan, O.C., M.Sc., PhD., C. Eng., MIMM, MRIC, FCAE, FCIM is an internationally renowned teacher, scientist and innovator in the area of sustainable development. He has more than 40 years of hands-on experience in technology development, commercialization, and skills development initiatives with both private and public sectors including the United Nations. He moved to Canada in 1974, after serving as Lecturer in University of Birmingham, UK. He subsequently held prominent positions in Canada’s engineering/technology sector, with companies such as Noranda, Eldorado Nuclear, ORTECH Corporation and Process Research ORTECH(PRO). He co-founded PRO in Mississauga in 1999 and has guided it to become a global leader in sustainable process technologies. His professional honours include Fellowship of Canadian Academy of Engineering, Canadian Institute of Mining, Metallurgy and Petroleum and many others. He also serves as Adjunct Professor in the University of Toronto. He has published more than 150 papers and written several books on science, process engineering and public policy.

Dr Lakshmanan has channeled his passion for community service through countless initiatives, supporting organizations like Indo-Canada Chamber of Commerce, Canada India Business Council, TiE Toronto, and IC-IMPACTS. Dr Lakshmanan is a co-founder and Past Chair of Canada India Foundation, a public policy organization, where he organized several sectoral Canada-India public policy forums and was instrumental in three visits to Canada by India’s former President, Dr. Abdul Kalam. With late Dr Kalam’s inspiration, he has been conducting conferences on Smart Villages at University of Toronto. He sponsored clean drinking water systems and a mobile hospital in rural India.
Dr Lakshmanan’s contributions to science and community service have earned him the Order of Canada award as an officer, and the prestigious Queen Elizabeth II Diamond Jubilee Medal and many other honours. In June 2019, he also received the Lifetime / Outstanding Achievement Award from Indo Canadian Chamber of Commerce.